**This story was written for the following prompt: “You have a useless superpower where you gain a random power each day that prepares you for the events stored in the day. Why this is useless? They’re all subtle, like summoning an extra toilet roll. Then, one day, you wake up with eldritch, god-like powers.”**

When I woke up, the door almost smacked me in the face.

I opened my eyes to be an inch away from my bedroom door, which was usually a few steps away. I blinked. Suddenly, the door was about a step away. I raised an eyebrow. Okay, zoom-eyes today. I blinked a few more times before I saw the familiar distance.

I dismissed it. Maybe I needed it today.

I brushed my teeth, took a shower and dressed myself. I disconnected my phone from the charger. It turned on as the cord left the socket. There was a calendar notification: “education thing today – dress well!: 11:00 Today.”

“Ohh.” I said. The zoom-eyes suddenly made sense. The President was coming to the University today. He was an alumnus. He was making a speech. I’ve got zoom-eyes to get a better look at him.

I packed my good suit.

A briefcase in my hand, I walked out of my house, over to my car. On my way out, I saw my neighbour. I nodded in his direction, and he smiled back. “Wow, what a weirdo.” he said.

I stopped dead. “Excuse me?” I said, turning around.
“What?” he said.
“What do you mean, ‘what’?”
“Jack, are you OK?” he said, very closely followed by, “What. A. Weirdo.” The weird thing was, his lips didn’t move with his second statement.

I frowned. Then my eyes widened. Telepathy.

Zoom-eyes and telepathy. Two in a day. And two actual powers today!

But what did that mean? I always, always used my powers. Not like this, with the door almost smacking me, and my neighbour calling me a weirdo. But in actual life, when I needed the powers the most. When there’s no toilet paper in the toilet, I make it out of thin air. When I need to check papers, I have super-fast writing. What the hell would I need telepathy for?

I got to the University, went to my office, and checked the time-table. I had to teach a lecture until 10:30. Then, the President. I nodded to myself, and walked to the class. It was a flight of stairs, a long corridor and another flight of stairs away.

It wasn’t a great lecture. It was the noisiest class I’ve ever had to teach. I heard bored students and preoccupied children. I couldn’t concentrate. The disturbance went from annoying to enraging. The rage kept building up inside me for no reason whatsoever. In my rage, I threw a whiteboard marker across the room at a student. As soon as it left my hand, I realized what I’d done. Come back.

In mid-air, the pen turned and flew back at me. I caught it as if it had come and landed in my hand. My brain acted before it could comprehend what just happened, and the student started. It had looked like I just aimed the pen at the dude’s head, and not actually thrown it. But I definitely saw it go towards him, and turn back.

That was a new power.

That was almost telekinesis.

My heart was beating. There’s no way I could go on teaching the class. I checked the clock. 10:25. “Ok, class dismissed!” I said, and slammed my briefcase shut. I stormed out of the class and headed right back for my office.

The door to my office slammed into my face.

I looked back. I looked around. I was in my office. Only a second ago, I was in the class. The class was far away.

My eyes widened as I realized what had happened.

I had superspeed, too.

This had to be connected to the President somehow. He was coming here. There’s no way my having four such high-level powers in one day, let alone one. I checked the clock. 10:27. Preparations for the president would start any time now. I just had to check one thing.

Inside my office, I looked at a pen in my pen-stand. I stuck out my hand. Almost immediately, the pen flew into my hand.

I always used every one of my powers.

There was only one explanation to all this.

The President of the United States was going to be assassinated today.

And I’m the only one who can stop it. 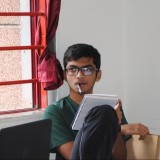 Nice!
What was the prompt?

I’m editing the post to say that before the story begins. Read on top.

But the ending is as predictable.

Whoa dude… that was GREAT